I have had my eyes on Pilgrimsleden for some time. I ran the second half backwards a couple of years ago. They have now restored and re-routed parts of the old pilgrim route, and the new stretch looked interesting. And it should be doable during the daytime of the long swedish summer days.

The route is 137,66km long wit 2350m of altitude gain. The mainpart of the route is trail, but also big portions of gravel, and asphalt. I set out to do a unsupported attempt on the route. This means that I can not ave any support of any kind, and I need to carry all my energy and other things from the start. I can fill up wit water from publicly available waters sources, and all churches and cemetaries have water available. And almost every stage passes a church. 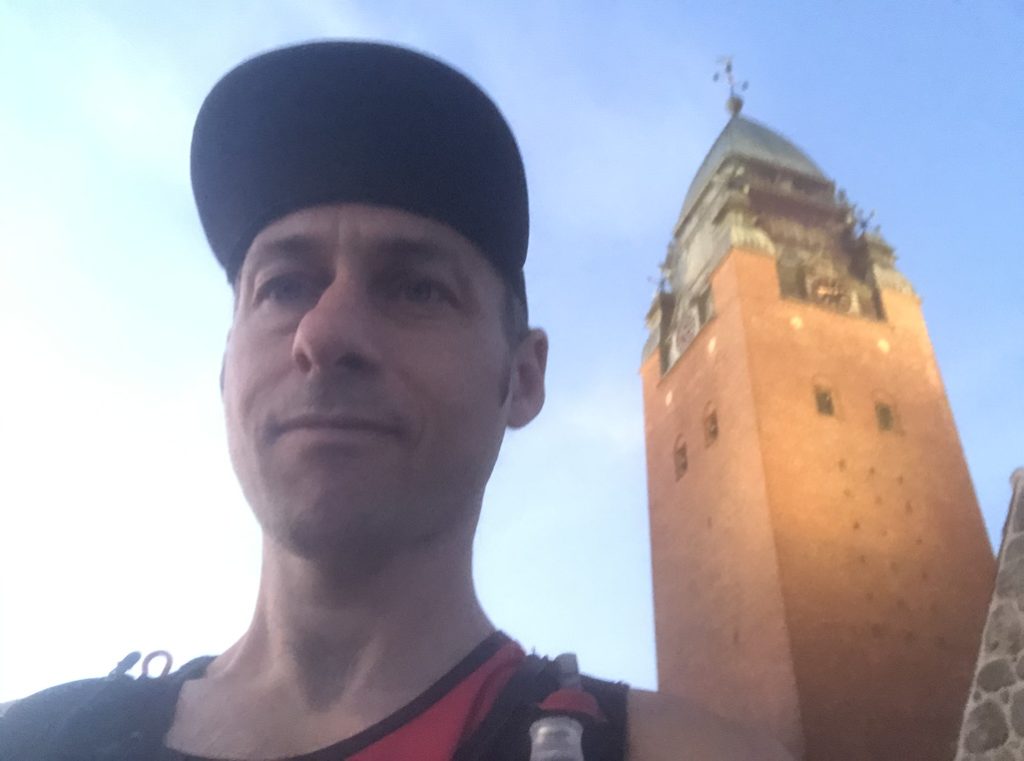 I started running through central Göteborg. A lot of churches needs to be passed on the way , and also skansen kronan. I ran nice and slow, and reached Nylöse Church after 1:03

After the first easy part, the route heads into the hilly singeltrack trails along Lärjeån. Here you can find water on the cemetary that you pass at km 11, and I filled one of my softflasks here. I reached Storås after 2:15 and 20,5 km. 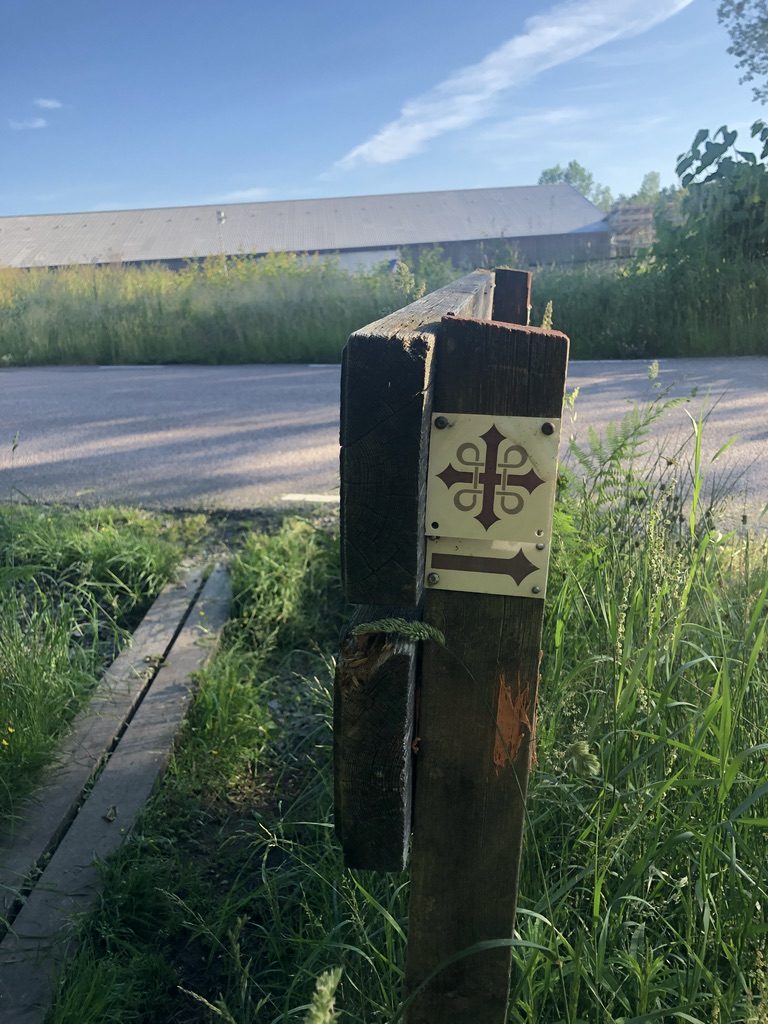 From Storås, following Lärjeån comes the real nature part. A new stretch of the trail had been cleared, and this was pure joy running here. Still early morninghours, so the heat was bearable. I skipped the filling of water at Jennylund, and continued on. I reached Jennylund after 3:34 and 31,5 km 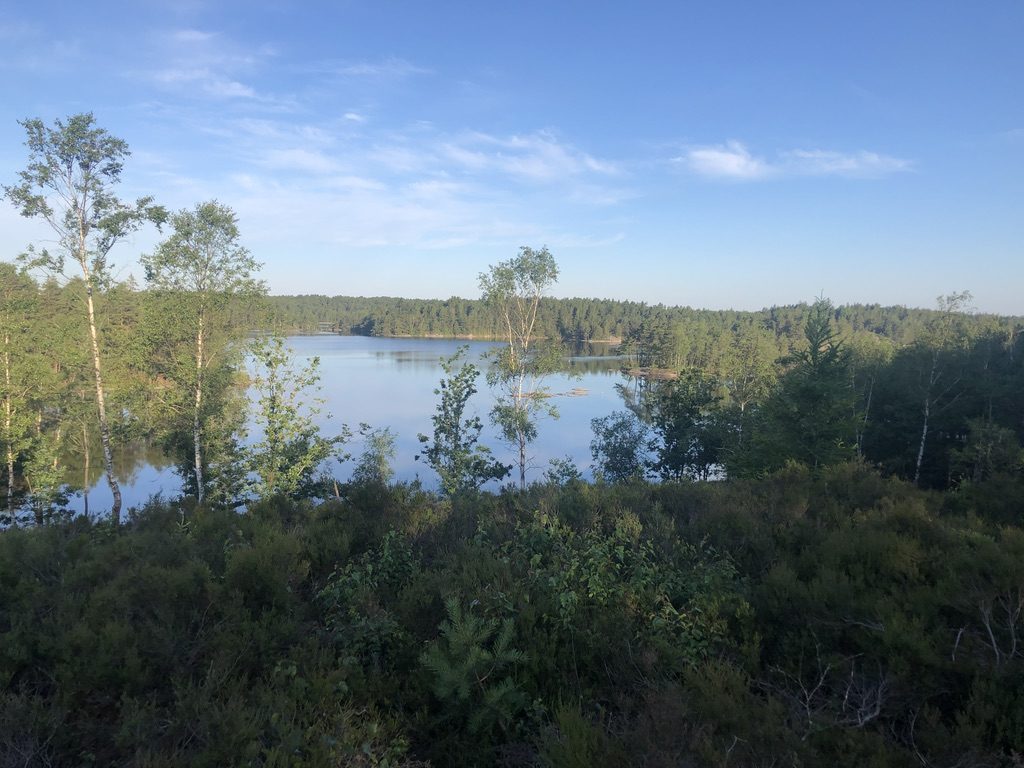 After 6 km I stopped at Dammekärr to refill my softflasks. I knew that I had a long stretch before I could fill up again, so I filled both bottles with Sportsdrink. The new stretch from Dammekärr to Starrkärr was really nice. A lot of small trails, but also some areas where there were no trails. Only trailmarkers and veggies. At Starrkärr church I filled 1 bottle with only fresh water, refilled the second bottled with sportsdrink and electrolytes. I reached Starrkärr Church after 5:35 and 48,7 km 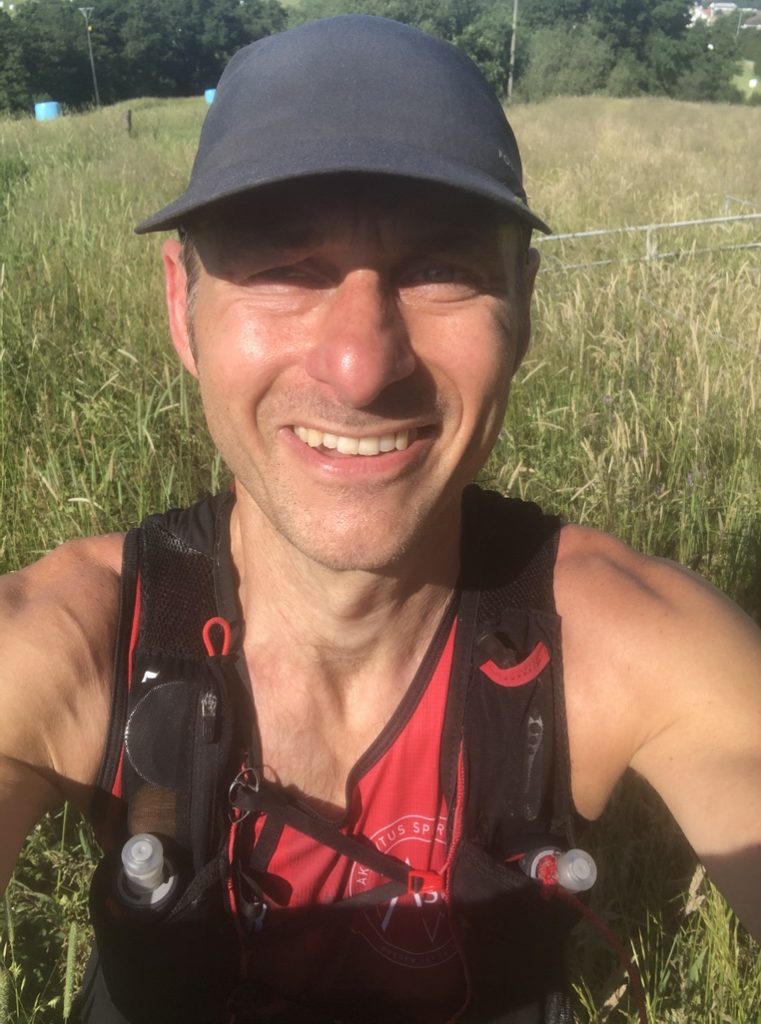 At this time of day it was getting quite hot. In the shade of the trees in the forrest, it was managable, but getting out on the asphalt stretch approaching Skepplanda, it was really warm. Just before Skepplanda, at forsvallen, the route made a detour around the waterfall and the old rockcarvings. I lived here as a child, so it was really emotional running in thoose surroundings.  I refilled both bottles, one with sportsdrink and extra electrolytes, and one with just water. On the way out I stopped and had a chat with a fellow Ultrarunner. I reached Skepplanda Church after 6:55, and 60 km. Keeping the average pace at 6:54 min/km, and the pace in motion at 6:30 min/km. 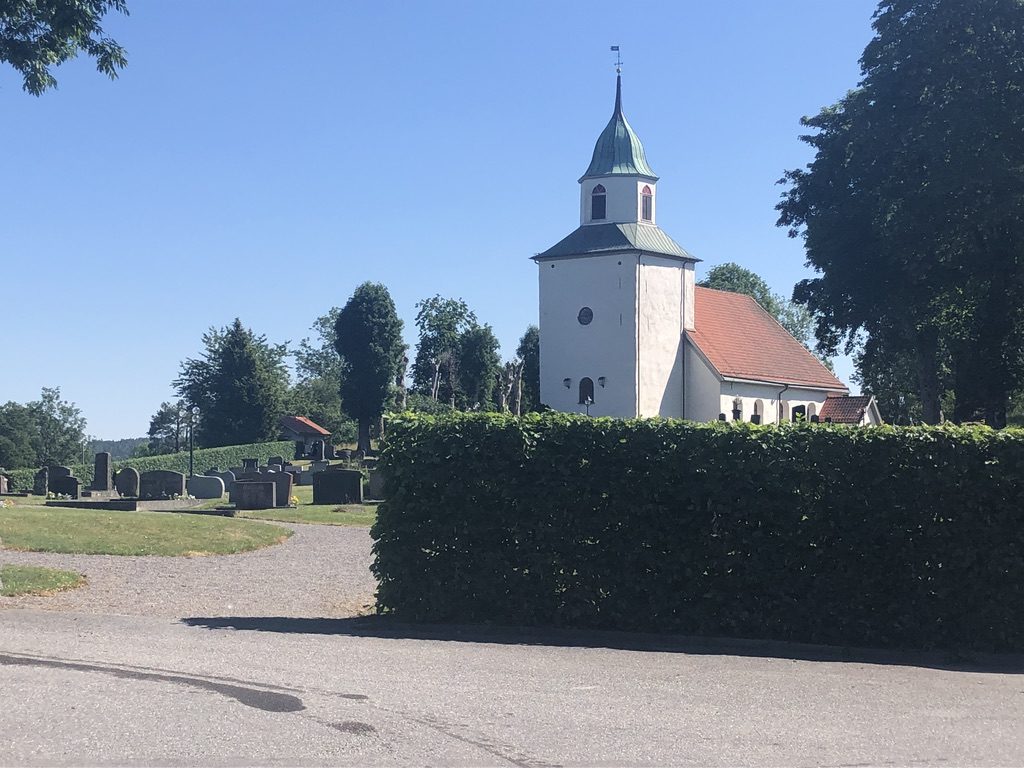 The route from Skepplanda passes over Alvhems golfcourse. At this point I was starting to get really overheated, and was looking for a place to take a swim. Not a lake in sight, and I did not want to swim in the water obstacles on the golf course, so I ran on.  At Lödöse kyrka I refilled both bottles, one of them with carbs and electrolytes, and one with water. I drank a good 1 liter extra as well. I reached Lödöse Kyrka after 8:29 and 69,8 km. 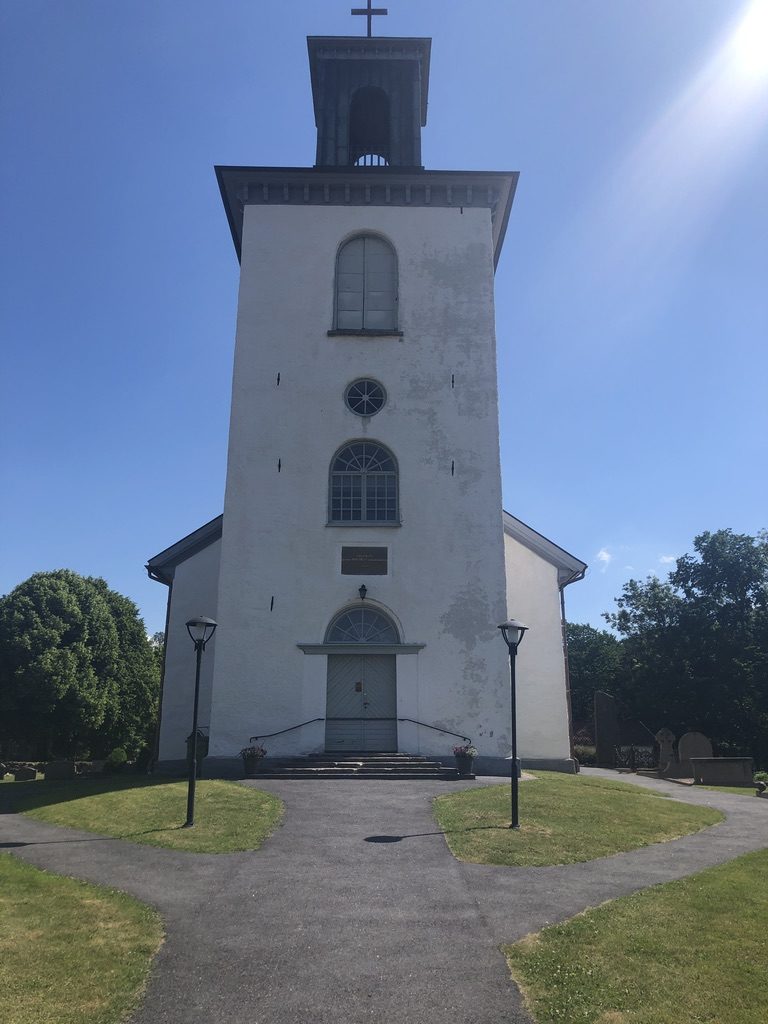 After a technical and hilly section after lödöse museum, the route came out on a long stretch on asphalt alongside the Göta älv river. At this time the temperature reading was 39 degrees, so when I saw a opening by the river side, I took a small detour, took of my backpack, shoes and socks, and went for a swim to cool down. I noticed a loot of blisters on my toes due to the moist, so I changed socks and added shea butter to my feet before I went on. 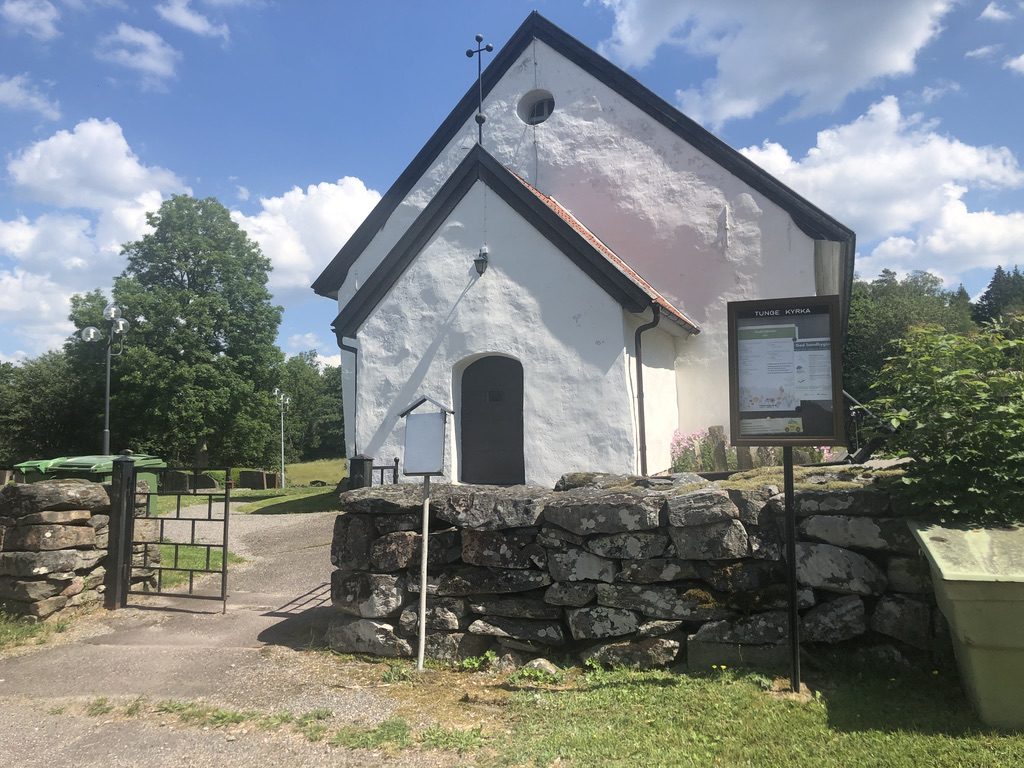 At km 77 I got to Tunge Church, where I filled up with water. The water was a bit murky here, so I don’t recommend this church for filling up water. So my stomach felt a bit shaky, and I burped a lot. I only drank the sportsdrink, to be able to refill te water at the next stop in Lilla Edet. I reached Lilla Edet  and Fuxerna Church after 10:46 and 85,5 km. 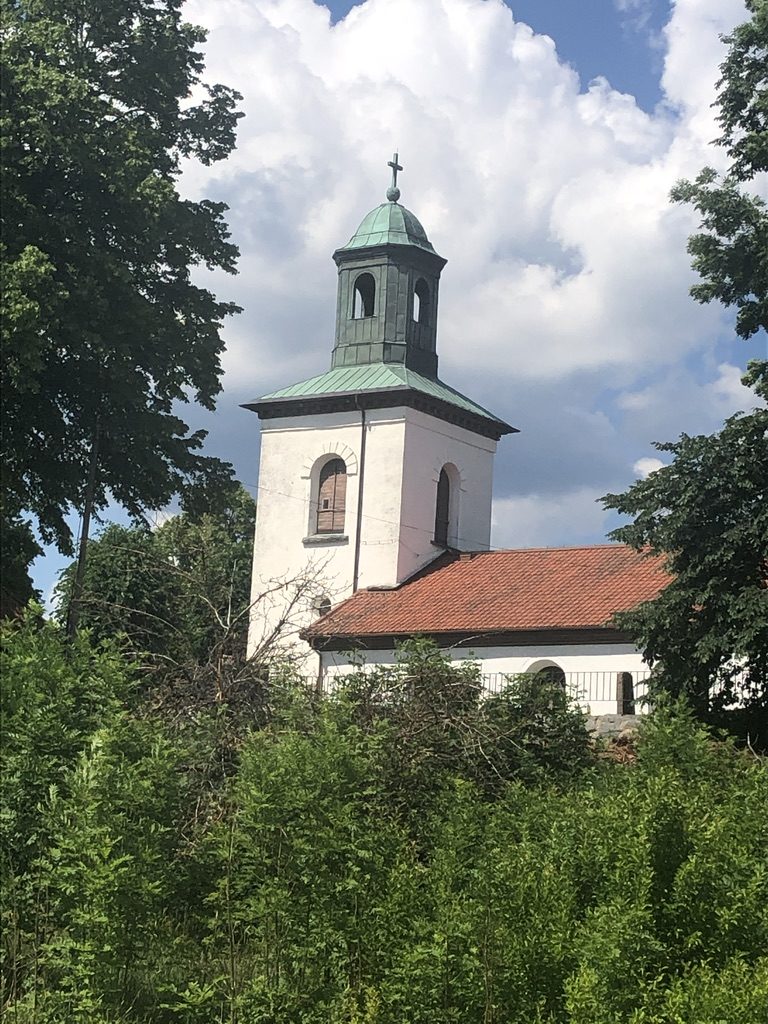 Passing over the river and over to the west side of Göta Älv, the route went up and down two mountains, where the trails were quite difficult from time to time. I did a lot of walking here, all the uphills, and also some parts where it was hard to navigate. At 96 km I stopped at the church in Hjärtum for a good refill of water and sportsdrink, knowing that it could be a long stretch without a chance to refill. I reached Utby  after 13:24 and 101,3 km. 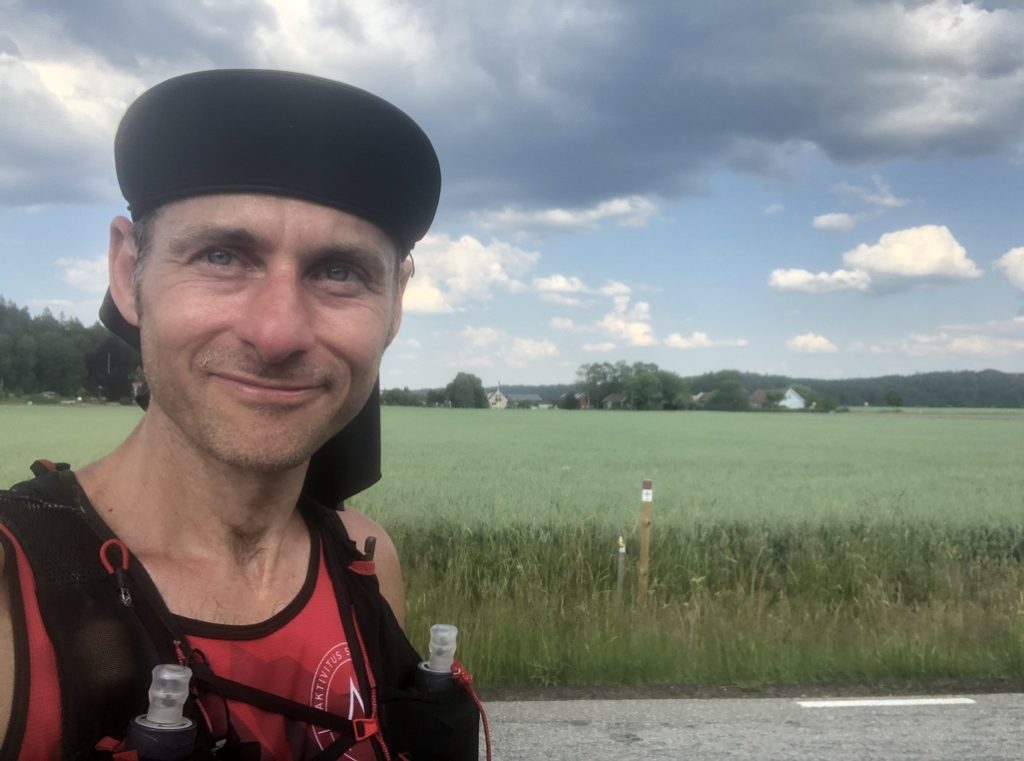 When I left Utby, the skies started to darken, and the heat wasn’t as pressing. I even got a few splashes of rain. I heard a distant thunder, but there was no real danger. The route was technical from time to time, and after 111 km I started to get a bit low on water. But I saw a waterhose on a building, and could get a refill here. It is always nice not to ration the water. 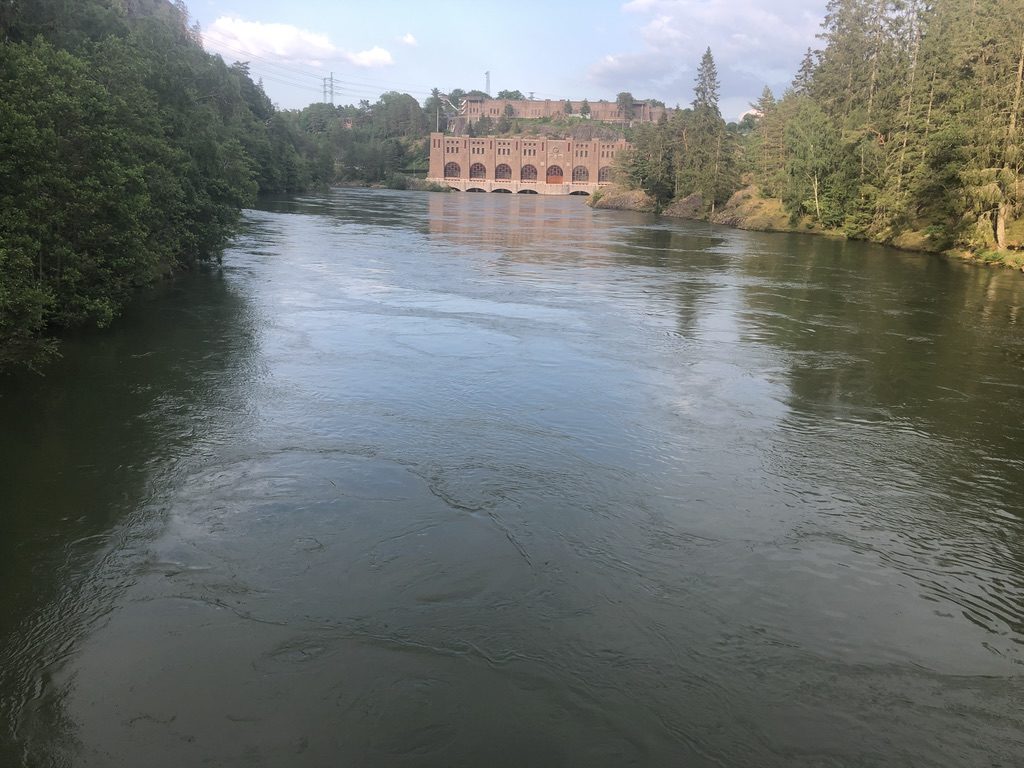 I reached te magnificent views of Göta Älv, and ran alongside the river, up and down, until I got to the power-station. There the route crossed over, and went 4km back down to the locks. At this stage I started to feel tired, and running was not fun any more. I refilled my bottles at the public toilet at km 119, and continued to the Church of Trollhättan, which I reached after 16:40 and 120,8 km. 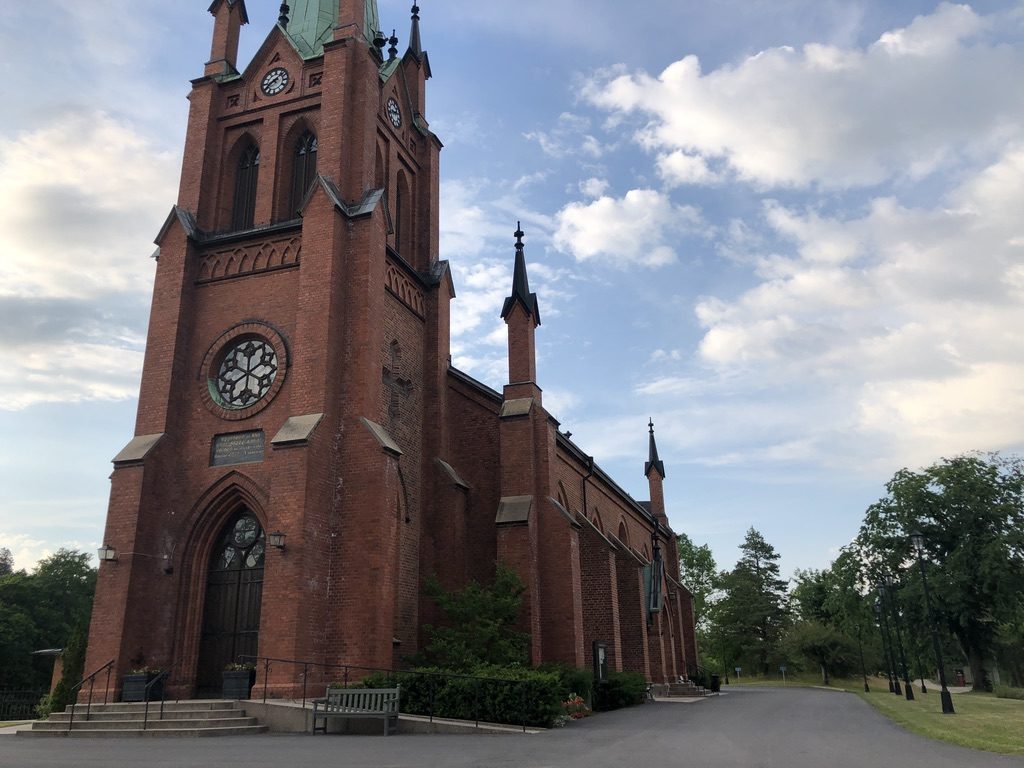 At this point a saw the finishline aproaching. I also knew that I had to keep moving to get there before dark. Fortunately, the route leading to Vänersborg was really easy, and I managed to run long stretches at the time now. I got to Vänersborg before the sun got down, and I could reach the end of the route in daylight. The total time was 18:41:10, and the distance 137,66 km. 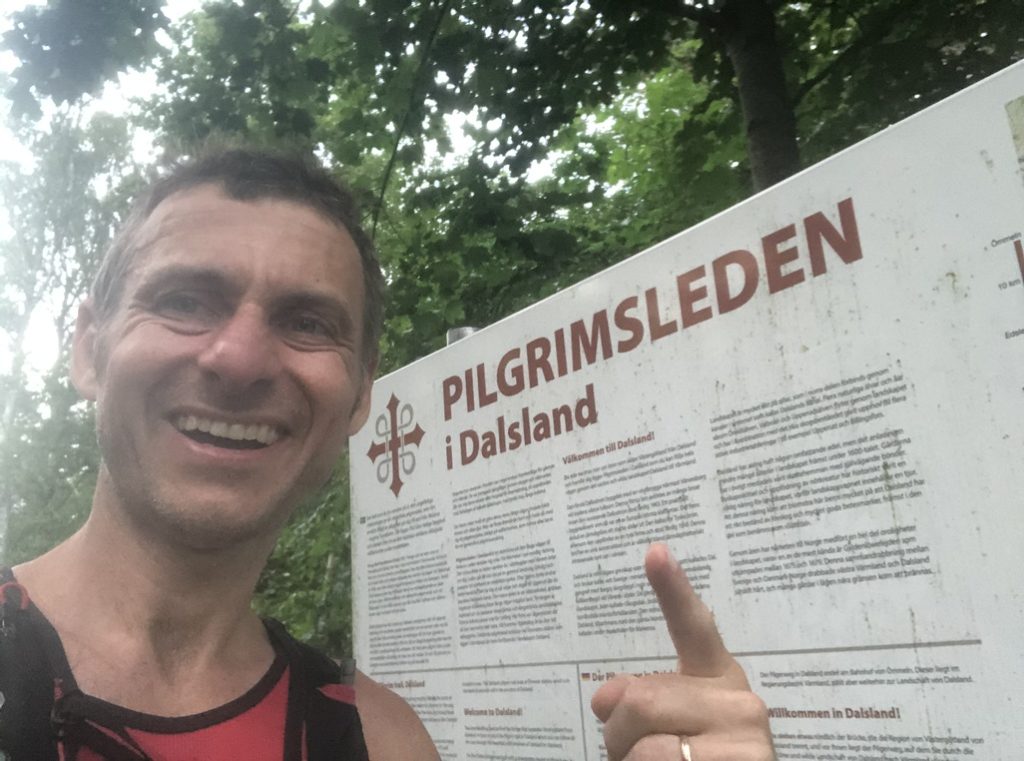 I walked back the last km to Vänersborg, and got a large cold beer when I was waiting for the train. Jocce came and joined me for a quick drink, and I got on the 23:09 train back to Bohus, where Linda came and picked me up.

The run is now published and approved as a new Fastest Known Time!
https://fastestknowntime.com/fkt/tomas-amneskog-pilgrimsleden-gota-alv-sweden-2020-06-26